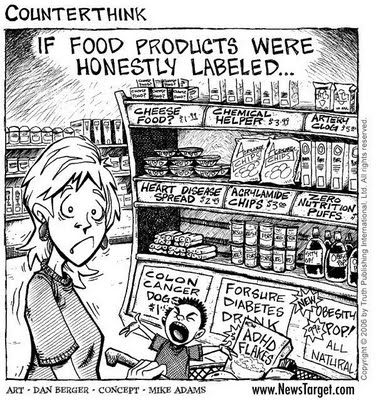 I briefly touched upon the health and wellness ‘misinformation’ that is is out there on my first, inaugural (LOL) post. A few readers (obviously, family) were quick to ask me to back up this claim and post some details.

So here it is – my list of Five Common Health Myths! These are in no particular order and no more significant than myths I don’t mention other than simply being the ones that came to me first!

1. Cardio is One of the Best Types of Exercise!

Traditional cardio for weight loss is pretty much useless. The issue with traditional cardio is that it actually stimulates the body to store fat because the body adapts to the kind of demands put on it. Long duration exercise (beyond 20 minutes) tricks the body into maintaining fat stores so that they will be available for the next session!

You can actually improve your health and increase fat burning by introducing interval training to your cardio routine.  Researchers have found that interval cardio creates a unique metabolic response that is largely responsible for its superior benefits. It produces high levels of chemical compounds called catecholamines, which allow more fat to be burned from under your skin and within your muscles. The resulting increase in fat oxidation is thought to drive the increased weight loss.

This is also the only type of exercise that will increase growth hormone levels. This is especially important after the age of 30 when growth hormones start to decline. I would say it’s much cheaper to have your body make growth hormone naturally than inject it like many athletes and celebrities do!

I don’t even know where to start with this one! I believe that GMOs may be one of the worst introductions to our diet ever! Studies have shown that GMOs cause disorders such as vital organ damage, gastrointestinal and immune system problems, accelerated aging, and dysfunctional regulation of insulin and cholesterol.

Since their introduction in 1996, multiple chronic illnesses have jumped from 7 percent to 13 percent of the population, food allergies doubled in less time, and many other ailments have exponentially increased. I’d have to say it’s not worth the risk for me or my family!

The problem lies in the fact that most studies make no effort to differentiate between saturated fat and trans fat!

Saturated fats from animal and vegetable sources provide the building blocks for cell membranes and a variety of hormones that your body properly cannot function without. Saturated fats also act as carriers for important fat-soluble vitamins A, D, E, and K.

On the other hand, trans fat does increase your LDL levels (“bad” cholesterol) while lowering your levels of HDL (“good” cholesterol). It can also cause major clogging of arteries, type 2 diabetes and other serious health problems.

There is a huge difference between the two but so often, they are considered one and the same!

What we really need to start doing is to STOP focusing so much on single nutrients and START focusing on dietary patterns instead. A simple diet of REAL foods and no more processed crap is the key!

4. Artificial Sweeteners are Safe and Help With Weight Loss!

The ironic part of this is the majority of people use artificial sweeteners to lose weight while most studies have shown us that those using these sweeteners actually GAIN more weight than those that don’t use them. Research suggests that artificial sweetener may disrupt your body’s natural ability to ‘count calories’.

While there are no discernible benefits for consuming artificial sweeteners, there ARE a number of health dangers associated with them. Aspartame, in particular, has been found to be a causitive factor in migraines, seizures, depression, vision changes, and brain cancer to list just a few.

There’s just no reason for people to be consuming these deadly substances!

5. Milk does Your Body Good!

The food industry has convinced us that milk is good for you! What they forgot to mention is that milk is only good for you if it’s RAW! Once milk is pasteurized, its physical structure changes in a way that can actually cause immune problems and allergies.

Most of the vitamins such as A, C, B6 and B12 are significantly decreased and volatile milk proteins are radically transformed into unnatural amino acid configurations that can actually worsen your health.  Milk has been well documentated to be a causitive factor in diarrhea, cramps, bloating, gas, gastrointestinal bleeding, iron-deficiency anemia, rashes, and much more. It has also been linked to insulin dependent diabetes, rheumatoid arthritis, infertility, and leukemia.

There are so many other alternatives to milk that diary consumption just isn’t necessary.

So there you have it – my short list of some common myths out there. Now it’s time for me to hit the bed!