The Smell of Danger!

The Smell of Danger!

We are brought up in a society that has led us to believe that a clean house is one that smells of lemons and pine cones and vanilla and cinnamon. Preferably, all at once if possible! Truth be told, we have come to demand the really artificial, potently strong smell of these air fresheners and often times, the real deal just doesn’t cut it. Unfortunately, these air fresheners are one of the most dangerous toxins in your house! 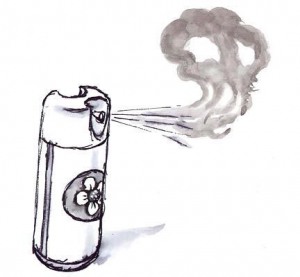 If you want to be healthy and you want your kids to be healthy, you will throw away all the artificial air fresheners in your house! All those sprays, plugins, and ridiculously strong smelling solids need to go! They do absolutely nothing to improve the air quality of your home and instead, are polluting your home with dangerous chemicals and toxins. They are essentially poisoning you in your own home!

A study by the California Air Resources Board found that air fresheners can produce toxic pollutants when used in the presence of ozone (a form of oxygen). Ozone enters indoor environments with outdoor air and is generally present indoors at levels up to 50 percent of outdoor levels. When the chemicals emitted from the air fresheners are combined with ozone, dangerous pollutants are produced. These include formaldehyde – a highly dangerous chemical that has been recognized by the EPA as a known cancer causing agent. You honestly have to be insane to knowingly allow this toxin into your home and expose your family to it. Also of concern is the production of acetaldeyde, organic acids, other oxygenated intermediates, hydrogen peroxide, and hydroxl radicals.

A 2007 study by the U.S. Natural Resources Defense Council also found that many air fresheners contain phthalates, chemicals that can adversely affect testosterone levels and lead to reproductive abnormalities in unborn babies. Another British study of 14,000 pregnant women found that children whose mothers used daily air fresheners had a much incidence of diarrhea and earaches in infancy and continuing on into childhood.

Studies also suggest that air fresheners increase your risk for a number of pulmonary diseases. Researchers have found that being exposed to chemicals in common air fresheners as little as once a week may increase your odds of developing asthma symptoms by 71 percent! Furthermore, a study done in 2006 found that people with high blood levels of the chemical 1,4 dichlorobenzene (routinely found in air fresheners) were much more likely to experience a decline in lung function.

A University of Washington study of top-selling air fresheners found that the products emitted dozens of different chemicals. All six products tested gave off at least one chemical regulated as toxic or hazardous under federal laws, but none of those chemicals was listed on the product labels. Even more disturbing is that five of the six products emitted one or more carcinogenic ‘hazardous air pollutants,’ which are considered by the EPA to have no safe exposure level.

We are enticed through clever and constant marketing to bring these air fresheners into our homes, our cars, our work place – but we need to stop this madness. It is expected that Americans will spend more than 1.72 billion dollars on air fresheners this year alone. Yet, scientific research clearly shows the dangers of these products. I could go on and on with the current studies out there warning of the dangers of air fresheners but I’m hoping you get the point. Bottom line is, don’t use them!

There are a number of ways to freshen the air in your house naturally. I recommend the following:

I really hope that you really do reconsider air fresheners after reading this. The dangers they pose just aren’t worth the risk!

American Thoracic Society (2007, October 14). Even Occasional Use Of Spray Cleaners May Cause Asthma In Adults. ScienceDaily.

University of California – Berkeley (2006, May 24). Many Cleaners, Air Fresheners May Pose Health Risks When Used Indoors.